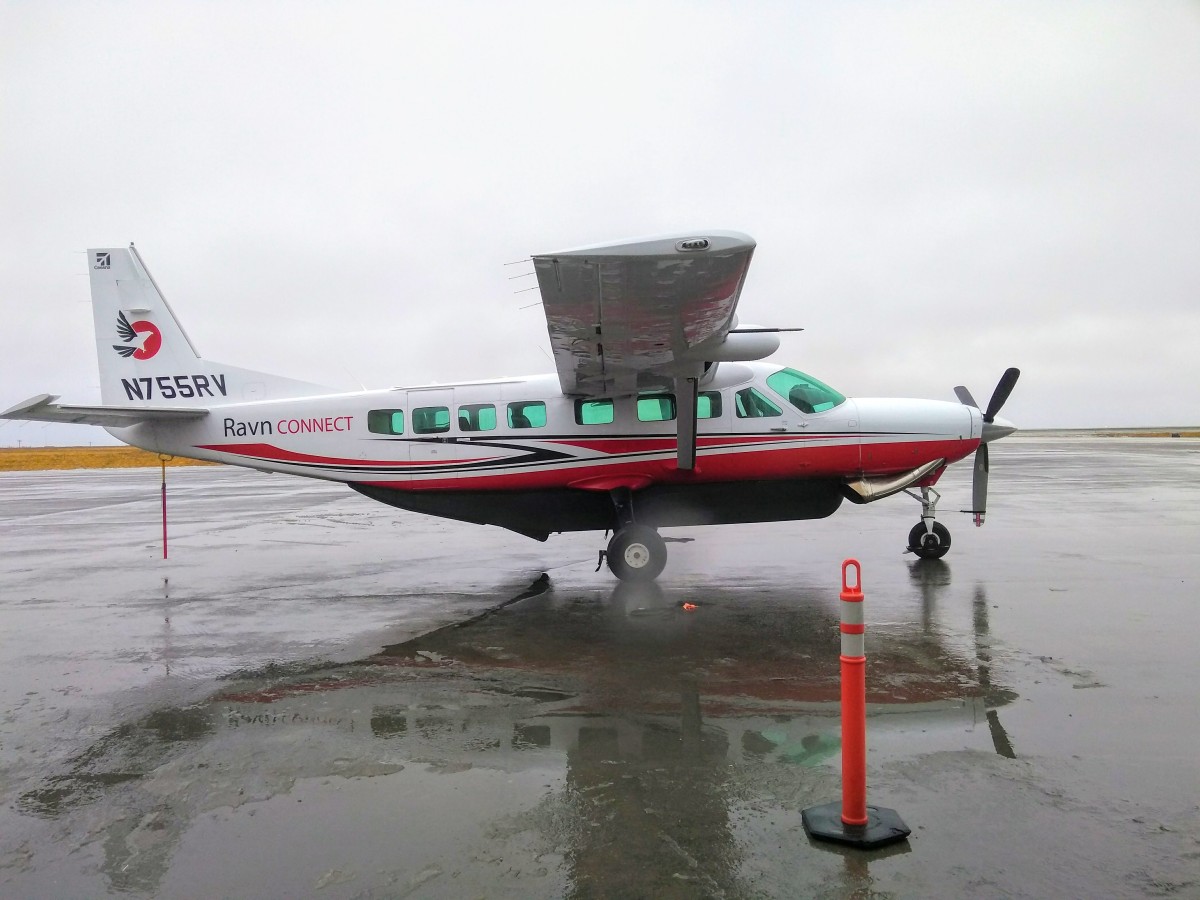 I’ve logged 16 fly days between Atmau and Bethel since my arrival in August.  It’s only a 10 minute flight.  But this time of year, a scheduled flight could be delayed for minutes, hours, or days.

The best way to describe travel in the Delta during the change of seasons is with the old saw,  “You can’t get there from here.”  A layer of ice covers the river, so you can’t travel by boat.  The ice is thin, so the river hasn’t yet become an ice highway.  There’s no snow, ruling out a 30-minute snowmobile ride.

Air travel is the only option this time of year — and fly days are subject to changing weather.  On any given day, or hour, the delta can be covered with fog or buffeted by howling high winds. There’s also mixed precipitation and freezing rain, the kind that would put any airport on weather hold.

Another useful turn of phrase to describe travel this time of year is, “Hurry up and wait.”  You need to be ready to jump at a moment’s notice, waiting for a lucky break in the weather.  You call the air carrier every half-hour or so to check the status of the flight.  You’re kind of in limbo, not sure whether you’re going to depart at 9:30 am, 4:30 pm, or perhaps try again the next day.  All you can do is keep your luggage and snow gear on hand — and try to relax like everyone else who’s lived here long enough to know you can’t rush a windstorm.

When the plane is said to be on its way, the next step is to climb into the John Deere Gator for a bumpy half-mile ride to the airstrip.  Then — wait.  Sometimes the flight is further delayed, which means getting a ride back and forth between the village and airstrip multiple times before the plan actually arrives. 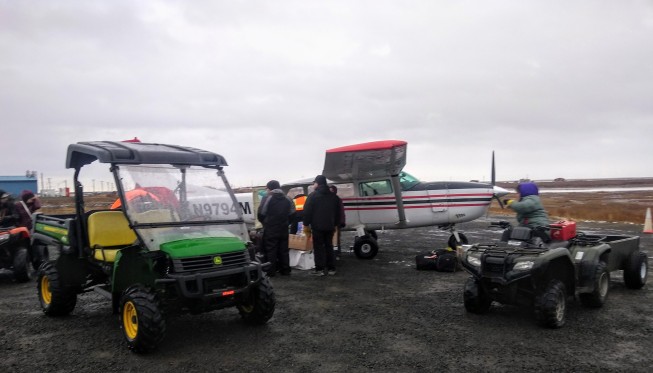 Most flyers know what it’s like to be stuck in an airport.  It’s boring and uncomfortable.  But that’s life.  Now imagine, instead of jockeying for the nearest phone-charger outlet in Gate 18, you’re standing on a gravel airstrip in a 20 mph westerly wind.  Another useful cliche comes to mind:  Dress in layers.

But for all this, fly day is as exciting as it gets.  Traveling in a single prop airplane is like riding a motorcycle — you can see the world all around you and feel the power of the wind.  A small plane has bigger windows and cruises at lower altitudes.  You can discover the world below as if an explorer, flying only a few hundred feet above the ground.

I’ve always appreciated pilots.  Their job might seem glorious, but it’s often tedious and stressful.  This is equally true in the delta, but taken up a notch or two.

The airport in Bethel (BET) is the busiest in the state.  It serves a large, low-population region with high transportation needs.  Pilots fill in for the lack taxi drivers, UPS trucks, and postal delivery carriers.  They carry villagers to doctor’s appointments and the AC grocery store.   They deliver Amazon packages and the daily mail.  And they do it in all kinds of weather.

If you talk to anyone in the airport business they’ll assure you, “If you can fly Bethel, you can fly anywhere.”  I’ve been told that BET pilots are in high demand from carriers all over the world.

I don’t doubt this, having flown in the co-pilot seat from time to time.  These people know how to fly with the wind blowing in all directions.  It’s a little scary the first time the plane lands almost sideways to the runway as the pilot crab-walks a landing.  See for yourself.  Here’s a 38 second video I took last Thursday morning.

But you get used to it.  When you see the pilot jiggling an instrument or reflexively jerking the stick, you know he’s not any more interested in crashing than you are.  He’s feeling out the wind, rapidly adjusting the speed of the prop and the angles of the flaps and rudder.  He’s in the groove, like a skier dancing through moguls, or a pitcher eyeing first base.  You’re in the hands of a pro, unlike any you’ve ever relied on before.

Today I’m returning to Atmau, two days weathered in.  Fortunately, I’ve been housed at the Old Mission House B&B.  I’ve had the whole place to myself for three nights — enough time to write a glowing Yelp review.

It’s 9:45am, a beautiful morning with the orange twilight of dawn resting on the horizon.  My carrier is Renfro aka Yute Airlines.  The picture at the top of this post is from Thursday, November 16th.  This next one is only four days later.  The weather, as you can see, changes quickly. 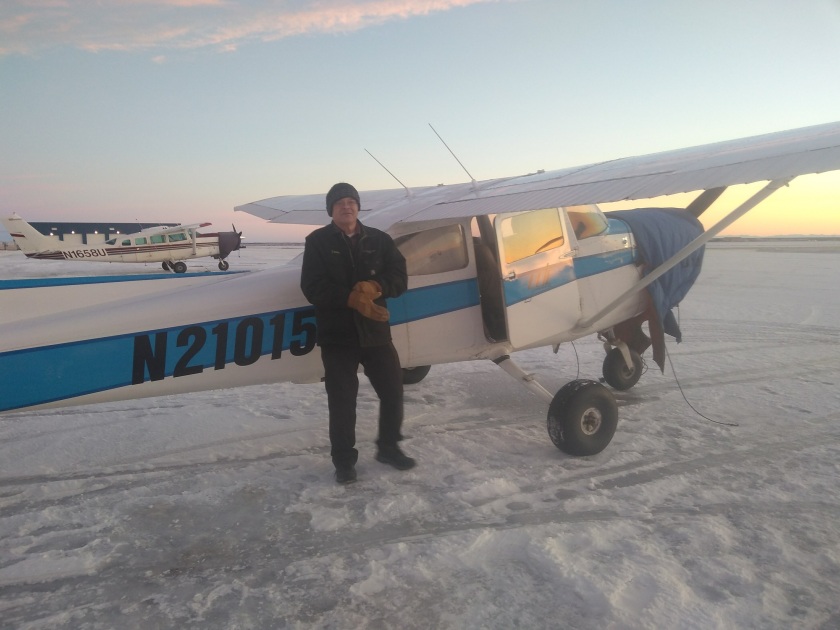 I’ve heard the road paving jobs are finishing up back home in Northfield.  Carrier Roasting is opening on East Street next to Good Measure.  A general sense of momentum is growing in Northfield, with reasonable progress and dissent along the way.  One of the most positive turnarounds I’ve observed over the last few years is the number of young families becoming engaged in local affairs.  The NCDN and Promise Community teams; the people showing up, rolling up their sleeves, experiencing trials and triumphs as they strive to improve Northfield.  We have a legacy of young families who’ve done this type of work for generations.  It’s good to see a new generation stepping up to the plate.  : )

One thought on “Fly Day!”

Give a call or send a note to set up a time to discuss options and review rate card. Email: natefreeman@gmail.com Phone: 802-552-3438
%d bloggers like this: